Transfer of undertaking: which employment conditions continue to apply?

If you transfer an undertaking or part of an undertaking you are obliged by law to take your employees with you. What’s more they retain all their rights and obligations under their current employment contract. Although this rule seems relatively clear, all sorts of questions arise in practice regarding specific employment conditions. For example, the question was and is to what extent do the applicable collective labour agreements transfer (they do) and remain in force, and how must conflicting labour agreements be dealt with (a legal maze). In this we discuss some specific employment conditions that have a special regime.

The right to pension, in principle, also passes to the new employer. This means that the transferee will have to continue the pension scheme of the employees transferred. Sometimes transition will not be smooth as the transferee might, for instance, not be allowed to participate in the scheme because it does not fall under the relevant sector and is consequently refused admittance to the scheme by the pension fund. The transferee will then, in our opinion, have to offer an comparable arrangement. What is more important however is that the legislature has accommodated the transferee: if the transferee had a pension scheme in place at the time of the transfer then it is allowed to include the employees in that scheme even if it a less favourable arrangement. This is an important exception to the rule that the employee may not be in a worse position as a consequence of a transfer of undertaking. Should this be the case, for example, because the transferor and the transferee already fall under the same scheme (they are both in the same sector), then it must be borne in mind that the premium arrears are also transferred. According to case law, the pension fund even has an independent right to claim the premium from the transferee. Incidentally the rule that pension debts are transferred, may be derogated from in collective labour agreements.

In employment law the number of service years accrued by an employee is important in various ways. It, for instance, affects the statutory notice period, the amount of the transition payment and it plays a role when determining which employees are eligible for dismissal on reorganisation. It is therefore important to the employees that their years of service are taken into account at the new employer. The length of service accrued by the employee is, in itself, not a right that passes on to the transferee. It is merely a factual circumstance from which certain rights could be derived. Only if the length of service at the transferor was linked to a specific financial or other right, then both the acquired right and the length of service applicable to that right pass to the transferee. Although this has not yet been explicitly determined at European level, this seems to also apply to non-pecuniary seniority rights, the notice period, the transition payment and the dismissal sequence. The underlying principle that seniority only passes over insofar as it is linked to a specific right needs some nuancing. If the employee performs the same activities after the transfer and because the accrued years of service have not been taken into account, suffers a substantial loss in salary, e.g., because the pay scale at the transferee is dependent on the length of service, then accrued years of service must be transferred so that this loss is more or less negated.

It seems not to ensue from the law itself – which after all talks of rights and obligations under the employment agreement – but at the beginning of 2015 the European Court of Justice determined that statutory provisions governing social security are also transferred. Up until that time this was not accepted in the Netherlands although there were exceptions in case law. For instance, the Court of Appeal (twice) ruled that the transferee had to assume obligation imposed on the transferor regarding continued payment of the employee’s salary (loonsanctie) because the rehabilitation obligations had been breached. It is therefore important that you are well-informed on this so that this can be borne in mind during the negotiations on the takeover. The same applies to possible premium arrears in relation to employees’ insurances. According to the Court of Appeal, these also pass on to the transferee. Nevertheless, it is questionable whether the transferee will be able to reclaim what it has paid from the transferor (if it then still exists at all).

A transfer of undertaking entails the automatic transfer of rights and obligations from the employment contract. Practice is, however, more intractable than the clear rule suggests: non-competition clauses can be given different substance, certain facilities can lapse/be replaced, pension entitlements are sometimes passed on, the fate of seniority/length of service is difficult to define and according to recent case law statutory rules relating to the employment contract sometimes also pass on. And so for each takeover it is important that the existent employment conditions, the agreements made and the premium arrears are identified and listed. 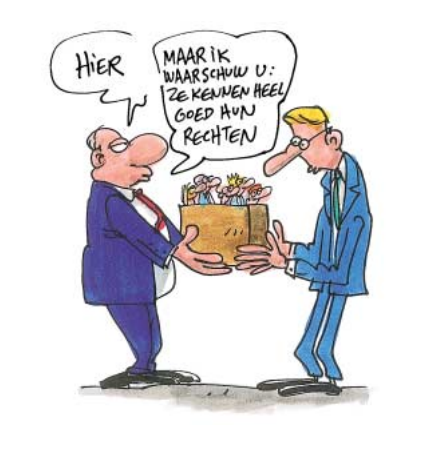